After finally getting a brief taste of what life is like at the front of the pack in Bahrain, Valterri Bottas took his first grand prix victory at the 81st attempt at Sochi. Sebastian Vettel ran him close but ultimately finished 2nd ahead of his teammate Kimi Raikkonen in 3rd. 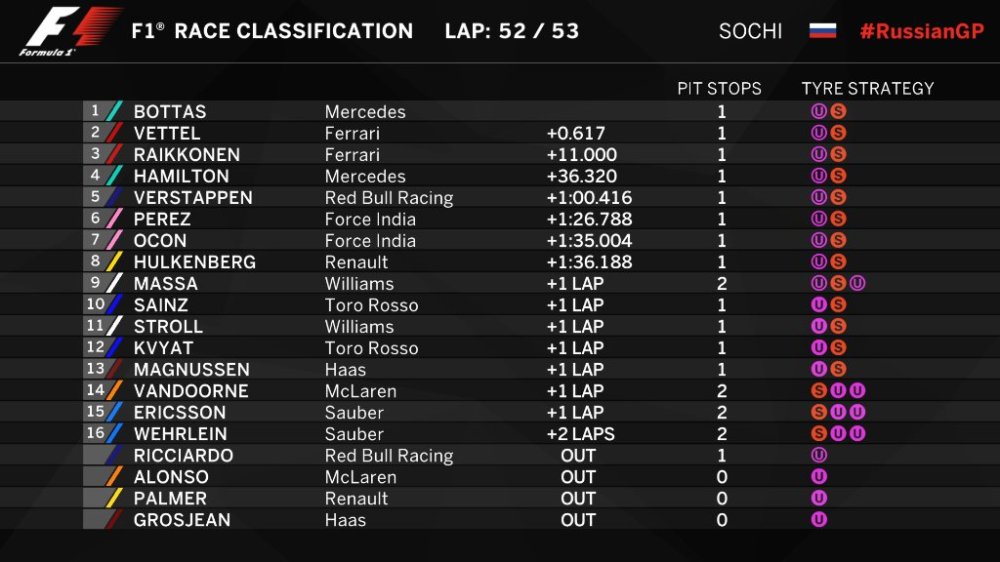 He was on the pace all weekend, out-qualified his much more illustrious teammate Lewis Hamilton and once he took the lead at the start (tucking in nicely behind the slipstream of Vettel and off he went), he was in a league of his own in that first stint, pulling away from the Ferrari of Sebastian Vettel. And when things got tense at the end, when he was in uncharted waters, he held on, because it sure seemed — one Valterri had that one lockup — that Vettel (on fresher tyres) would reel him in and pass him, but Bottas held on for a memorable maiden win.

“It’s going to take a while to sink in. Normally I’m not that emotional but hearing the Finnish national anthem was very special for me. It’s all a bit surreal, the first win and hopefully the first of many. It was definitely one of my best races ever. The pressure from Sebastian wasn’t too bad; the main issue was with the lapped cars, trying to get past those. It was tricky to pass them without losing time. I also had a lockup with about 15 laps to go that hurt the pace, but it was manageable. I asked for a bit of radio silence just to get on it and focus. I’m sure this victory will give me lots of confidence going forward. I knew I could do these results, I always trusted my ability, but this result confirms it.”

(A cracking trophy, by the way)

The win not only gets that monkey off of his back (which would’ve only gotten larger as the season progressed) but it also puts Bottas on the outskirts of the title charge, 63 points compared the leader’s (Vettel) 86 points. As Nico Rosberg (and many others before him) would tell you, leads can disappear quickly.

Despite some criticism of the VJM-10 (with upgrades coming at Barcelona), Force India continue to finish ahead of their rivals. Another double points finish for the ‘Pink Panthers’, Perez finishing 6th and Ocon finishing in 7th.

To be fair, those finishes should’ve been 7th and 8th, a slow puncture forced Williams’ Felipe Massa to pit from 6th late on, handing Force India some extra points. Regardless, the extra points helps Force India (31 points) tighten their early grip on 4th place in the constructors standings ahead of Williams (18 points, all scored by Felipe Massa).

Lance Stroll finished a race, his first race finish in four attempts after he secured 11th place. Bar the first lap spin under the safety car, he kept his nose clean and brought the car home, even though he didn’t know exactly what to do when the race was over…

“It was so unfortunate. I had a really good start and think I was around P8 at one point, and then I got squeezed on the kerb, there wasn’t much grip and the car just got away from me. I knew I didn’t have any damage, but I fell to the back and it was just one of those things that happens. After that, it was a difficult first stint because I had that spin and then had to spin the car round to keep going, and I overheated the rears quite a bit so I had poor grip. But then I recovered a bit on the second stint and saw the chequered flag for the first time, which was nice. It was a bit disappointing with the spin, as I think it could have been quite a bit better, but we will take our first finish.”

He has had his struggles (and they haven’t all been his fault, to be fair) so it was just good to see Stroll finish a race — should build his confidence going forward.

A very strange weekend for Lewis Hamilton, he just didn’t have the pace — which is unusual. Very unusual. He was half a second off the pace in qualifying (pretty much all of that time was lost in the final sector) and he dropped off in the race into nowhere, constantly radioing in issues with the cooling, he felt the car was overheating and had to drop back to cool it off.

“…For me it was a very tough weekend. I just wasn’t quick enough. I’ve never had cooling issues like that before but it meant I was out of the race from the get-go. I think I had the pace to fight with Kimi, but the car just kept overheating. Ultimately, if I had better pace then I would have been further up. At least I got some good points for the team. I’m just hopeful that I can pick up the pace at the next race.”

As Lewis put it himself, he wasn’t quick enough. Even if he didn’t have the issues he had, whose to say he would’ve even been able to fight with the likes of Vettel and Bottas at the front? He was off the pace all weekend compared to his teammate, I don’t think he would’ve matched him this weekend.

The only saving grace for Lewis this weekend was that Vettel wasn’t able to score maximum points but did see the margin between himself and Sebastian increase to 13 points.

Flip sake… This can’t get any worse, can it? After Stoffel Vandoorne suffered a DNS (did not start) at Bahrain, Fernando suffered the same fate in Russia — an ERS issue meant that, for the first time since Indianapolis 2005 (the infamous Michelin tyre scandal), Fernando did not start the race.

“It’s tough, it’s frustrating – every weekend is the same.

“My power unit didn’t have the usual power during the formation lap, so my engineer told me to change some settings on the steering wheel. Unfortunately, that didn’t work and towards the end of the lap the engine shut down. My race was over before it started.

“But Formula 1 is my life, so hopefully we can improve the situation soon.”

“You cannot hide behind a result like this: finishing 14th is not why McLaren-Honda goes racing, and, believe me, we are working hard to make sure this level of performance doesn’t last for long.

“That said, it’s still extremely disappointing to run into reliability and performance issues during a race weekend – we must work together to pull ourselves out of this position.

“As for Fernando, I share his frustration – it’s not acceptable to start the second consecutive grand prix with only one car, and we need to address this shortcoming immediately. He is naturally disappointed, but things will get better.”

I hope he’s right. I hope things will get better. This is beyond a joke and I can’t help but worry if this is steering Fernando closer to retirement/formula outside of F1.

Sure, let’s lump both of these together.

Grosjean was caught out in qualifying by the two accidents at the end of Q1 and qualified P20 (started P19 once Vandoorne’s 15 place grid-penalty was applied) and Palmer spun on his final hot-lap in Q1 after his team stayed up after hours to change the chassis.

They say start as you mean to go on. I guess it was fitting then, given both of their weekend had gone up to that point, that they collided with each other on lap 1 and were forced into retirement.

Looking at the accident, I don’t think it was anyone’s fault but it summed up their disappointing weekends, for sure.

“The weekend ended how it started – badly. I think the best thing we can do is put it behind us and concentrate on Spain…”

“I had a decent-enough start then heading down to Turn Two there was a Sauber on my outside then Romain made a very ambitious move over the kerbs on the inside from behind. There was no space for me to go because of the Sauber, so maybe Romain wasn’t aware of that, but he kept it in, hit me, then we were both out of the race. That was a shame for both of us really. I feel for my crew this weekend as they’ve worked so hard on the car, then we had such a short race. Now it’s reset, reload and look to Barcelona.”

It hasn’t been easy-going for Jo, he needs a good result and he needs one quickly. Nico Hulkenburg is absolutely decimating him in the inter-team battle and some would say Jo was lucky to get the seat this season to begin with…

Massa was running in a very handy 6th place and was having a great weekend having already split the Red Bull’s in qualifying but a slow puncture forced Massa to pit late and, as a result, he fell to 9th place.

“I’m disappointed, we were just unlucky with the tyres. I was really taking care of the car and the tyres, keeping the gaps in the right place, and we had a sixth position in our pocket today. It is unfortunate and painful for the team that we have lost good points, but we can’t do anything about it. The car felt good, it was consistent with a good pace, I had a good start and first lap. I was around eight seconds ahead of Perez, we were just unlucky…”

As Felipe said, nothing you can do about it but it’s unfortunate. He was on for some good points…